Supervising elementary students on the playground gives you a lot of opportunities to interact with kids and learn about them in different ways than you might otherwise in the classroom. When I am on supervision, I am always being called over to the swing set by the kids who want me to give them a push. Most of the time I appease them, asking if they want an ‘under-duck’ or just a small push, usually they want the ‘under-duck’. If you are not familiar with the ‘under-duck’, it involves holding the edge of the swing seat, pulling the child back, and then running forward as fast as you can, pushing the child high enough in the air that you can run underneath them. Being over six feet tall, my ‘under-ducks’ are pretty awesome.

Today I had a chance to visit Hepburn School, a place where I served as Vice-Principal from 2012 to 2016. While I was there I ran into some grade seven students who I taught math to when they were in grade 1. The students were reading together in the hall and in the classroom, and I took some time to reconnect with them, asking how things were going. Out of the corner of my eye I spotted a young girl who was standing with her friend, both of them holding their books. This young girl was one of the kids who always asked me for ‘under-ducks’. When she was in grade one, this girl did not talk to boys. None. Not her male classmates, not other boys in the school, none. She did, however, talk to me just enough to ask for an ‘under-duck’ at recess.

As we chatted today, I joked with her about playing on the swings, asking if she still gets a chance to. Looking up at me through her thick glasses, she smiled and quietly replied, “sometimes”. Then she said something that bypassed my brain and went straight to my heart. She said, “but I still haven’t gone over the moon yet”. You see, that was one of my jokes with her. I used to say, “this is going to be a big one. This one will send you all the way to the moon!” I could not believe she remembered that! I stood there frozen, trying not to let the lump in my throat turn into tears in my eyes. Instead, I offered a chuckle and wished her well.

This is the awesome gift we carry with us every day. Our students look up to us, and the words we say have weight. Our words have an impact. However, with this gift comes an enormous responsibility. Just as our words can lift someone up, so too can our words wound. I began to wonder about the times my words hurt a student. I hope not many, but I am not naive enough to think I have never hurt a student with my words. I know I cannot go back and undo the past, but I can continue to be aware of what I say every day to every child. I know I’ll make mistakes, and inadvertently say something that may have a negative impact on a child, but I will keep trying to make sure the positives outweigh the negatives.

All the way to the moon! 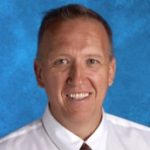