There was a quiet anticipation as we made our way through the old, winding corridors. I could hear the conversations as the students trailed behind me, this was a new experience for most of them, and it was clear they were in awe of their surroundings. This learning activity was set up by their Physics teacher, @ellen_verity , and the students only knew one thing, and that was that they would be completing a learning lab studying inelastic collisions. I was along as a chaperone and was just as excited. Part of the excitement was in the wonder of what we’d be learning, the other was the flood of memories as we walked by old classrooms where I had studied mathematics as a University student many years earlier. 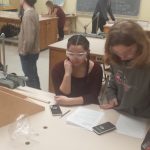 We were met by two men, a lab instructor and a graduate student, and they took us to the science lab where we would spend the next two hours creating collisions. After an introduction and a brief discussion outlining the lab the students would be completing, the work began. The students were busy determining mass, calculating velocities, and wrestling with formulae that first-year university physics students would normally encounter. It was a treat to watch the students learning together as they completed the 90-minute lab experiment. One of the comments that stood out to me above all the others was from a grade 12 boy who had been struggling to determine the energy loss in the experiment. He had repeatedly tried and failed to calculate the correct answer, his only support was from the facilitator who encouraged him to “check his math” as his answer fell outside of the acceptable range that the instructor had told the students to keep in mind. He turned to his lab partner and said, “I can’t believe I’m still working at this, it’s not even for marks”. The boys laughed and then returned to their work. Eventually, they had found the error in their calculation, and when they had succeeded they could not hide their pride. They had persisted and were rewarded for their hard work. This ‘stick-withitness’ was demonstrated at all the stations, not a single group dropped their pencils and said, “that’s it, we’re done here”. It made me think about why, and I have a few theories.

1. Environment: the students were working in a different environment than they were used to, and it seemed to be a big change for them. In reality, there was not a lot of difference between their school lab to the one they were in on this day; the tables were similar in height, the stools looked and felt the same, the lighting and temperature were familiar, and one student even noticed the laminate on the counter tops was peeling, just like back at school! So while the different setting surely had an impact on their mindset, I do not think it was the greatest influence.

2. The lab facilitator: the students commented on how smart the lab facilitator was. One student marveled at how he would manipulate different formulas with ease, while another student found it interesting how the facilitator could predict the mistakes students would make. It was apparent to me that the students wanted to do well for this facilitator, and wanted him to know that they brought with them a solid understanding of high school math and physics. While this desire to impress was apparent, like the environment, I do not think this was the greatest influence either.

3. The challenge: this lab involved shooting a 60-gram steel ball into an apparatus that consisted of what I would describe as a cage attached to a pendulum that would swing up using the momentum of the shot. The challenge was to use simple measurements (i.e. height, distance, gravity) to determine the initial and final velocity of the ball. From there the students were challenged to use this information to calculate momentum and eventually determine if there was a conservation of energy. All of this flew straight over my head, but it was fun to watch the kids work through a lab that was not too difficult, yet not too simple. It was a task that was just right in terms of rigor. While the task, was in the Goldilocks zone, much like the environment and the facilitator, I do not think it was the greatest influence.

4. A sense of pride: above all else, I believe the students wanted to successfully complete the lab for their own sense of pride. It was wonderful to see the smiles on their faces when they had correctly calculated the velocity or the momentum. It was wonderful to watch them work together to compare their calculations and discuss what they had learned. It was wonderful to watch them traverse the highs and lows that are typically associated with deep learning. I believe it was this sense of pride that was the greatest motivator for the students, after all, like that student indicated, they were not getting any marks for this. This was truly learning for the sake of learning, and I could feel the engagement in the room.

Given that we are currently immersed in looking at and talking about our assessment practices, I could not help but think about how closely engagement is tied to our assessment work. In her book, @KatieWhite426  writes,

engagment is strongly connected to assessment. Not getting the best effort from our students and feeling like we are working harder than our learners are symptoms of a system not grounded in authentic learning” (p. 153).

Reading this took me back to many times in my classes when the kids were not as “in to” the learning as I had thought they would be. I felt like I had created a highly engaging lessons only to see slumped shoulders and partial efforts. I would have chalked this up to “kids being kids”, however there also numerous lessons when the exact same students were highly engaged and motivated. I had to come to terms with the fact that it was me, not them. I also had to be gentle on myself and forgive myself when a lesson fell flat. I had to have the belief that I could learn from it and improve on it.

This also makes me think of our mindset, as Katie’s quote invites us to view engagement as something that is within our control versus looking at it as something the students consciously choose (either they want to be engaged or they don’t). Of course, going one step further, this also takes me back to our school goal, every adult at #WaldheimSchool will develop a deep and thorough understanding of every student they work with as learners. If we really know our learners we can then begin to craft engaging learning opportunities which in turn will lead to authentic assessments. I’d invite you to think about this the next time it feels like you are working harder than the students are.

Here’s what is on the horizon for our final week before the Christmas break:

You can accomplish anything in life, provided you do not mind who gets the credit

I’m currently into the early stages of Good to Great by Jim Collins, and one of the overarching themes has been the importance of being willing to let others take the credit when things go well. As I read this, I immediately thought about Trace and Ellen and the success they’ve experienced with the senior girls soccer program. When speaking with them, they never talk about the work they have done. As coaches, they speak about the team, the way the girls work together, the way they support each other, the way they push each other to become better, and the way they have grown together. Our senior girls soccer program has gone from good to great. Trace and Ellen accomplished a great feat, and neither of them were concerned about getting the credit. 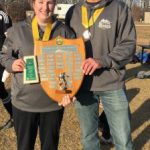 I think about our adult learning, and how proud I am of the work we are all doing. The learning is not restricted to just our teachers, it’s all hands on deck. It is evident that the EAs, our custodial staff, and our admin assistants are a part of our learning. Their finger prints are all over our growth and their impact is especially evident with our most vulnerable and reluctant learners. Key to this learning is the work of our learning facilitators, Steve and Shantel. While they are vital to our growth, they will be the first to point to the impact Brenda has had on them as learning leaders, and how she continues to play a role in their work. While their impact is immense, none of them will stand up and say, “for it is I that has caused this learning to occur”. Even just writing that seems so absurd, which is a testament to their humility.

Our soccer program and our adult learning are  just two examples, and there are so many more I could include, such as:

I’m sure I’m missing other examples, and my apologies to those I may have overlooked.

These programs do not grow through good luck, they require the leadership that you provide. Hopefully as you are reading this you are reflecting on your role in the growth that is happening at Waldheim School. Hopefully you are thinking about how you are part of our story. I’d invite you to contemplate the following questions:

When I think about the great programs that are occurring in our school (and in our school division as a whole), I think about the quiet leaders that working to make this happen. I think about how Trace and Ellen would answer those 5 questions as they relate to their soccer program, and I’m pretty sure I know what they’d say. As Steve, Shantel, and Jesse discussed at our last PD day together, one of the greatest impacts to student learning, based on John Hattie’s work (found here), is collective teacher efficacy. As we continue to strive for greatness as a school, think about your role and remember, you are an important member of the team, and your gifts are needed.

Here’s what is on the horizon this week: 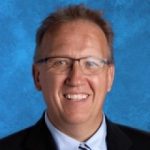